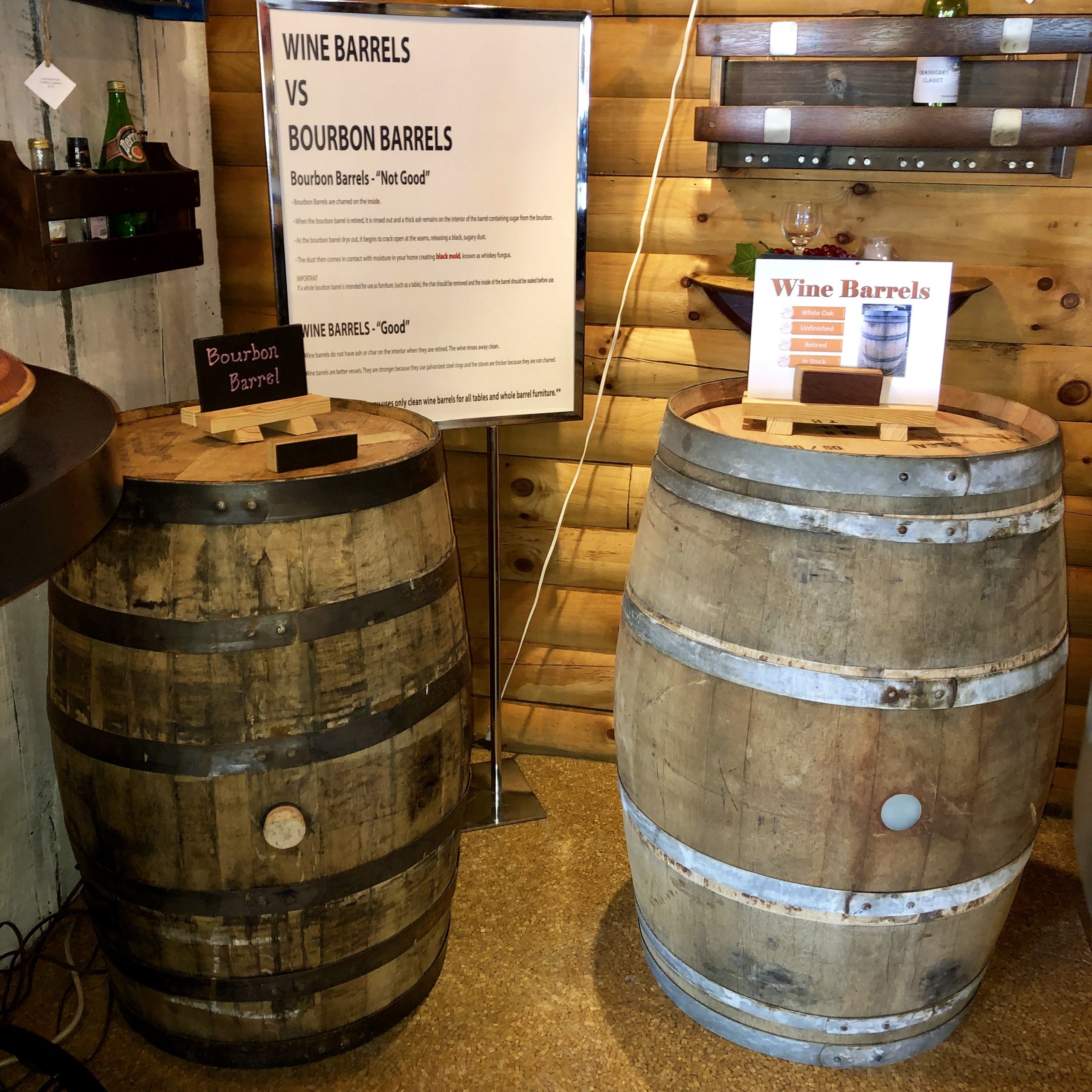 Educating yourself as to the differences in a wine and whiskey barrel is the first step towards understanding a barrel. There is a huge difference between a whiskey barrel and a wine barrel. It is an art to make a barrel to just the right specifications for use. A Cooper (a person who is trained in the art of barrel making) will apprentice at the craft for up to 7 years! They are trained on how to cut the wood, drying time, assembling the barrel, and just the right amount of toasting or burn for the barrel. Whiskey barrels are more standard in size with them holding 50 gallons of choice beverages at the start. Wine barrels are 59 gallons but will vary in height and width depending on the type of wine that is going into the barrel.

And all this is well and good. But what we want to focus on is the process of lighting a fire inside the barrel to produce the rich flavors that come from whiskey and wine. This process is charring for Whiskey and toasting for Wine. What happens to the inside of the barrel is significant for the aging of both beverages and while it is very necessary for the making of the beverage, it does not equate to the best choice for aftermarket barrel uses.

Whiskey barrels are more often charred on the inside. They are burnt to a crisp and then filled with whiskey, put on ricks for up to 15 years to become a wonderful amber colored adult beverage. Take the Kentucky Bourbon Trail and you will find out all about the process involved.

Wine barrels on the other hand are toasted. There are 3 different levels of toasting available: Light, Medium and Dark. While this means putting the unfinished barrel over an open fire or flame, there is no charring done to the wood. It is just like a lightly browned piece of toast, warm enough to melt your butter, but not stiff like dark toast or burnt toast. Another unique factor with wine barrels is that they will only be used up to 5 times or for 5 years. It does happen when a wine barrel is used for a 6th year, but most wine barrels are only used for 5 years or 5 crushes of grapes to ferment.

So when Chris first started out working with barrels, he too started with the Whiskey Barrel. But after a little while, he noticed some black mold growing around the barrel. It even went up the wall behind the barrel. Humidity combined with the char dust inside the barrel, caused a black alcohol mold to grow. This fungus even has a name: Baudoinia. In 2007, a paper was published by the University of Toronto mycologist, James Scott. You see, as the barrel dries out, the staves will shrink and the wonderful charring has turned to dust in the bottom of the barrel and starts to leach out. When it mixes with the humidity of your home, it turns to mold and begins it’s destructive force on your home. After several moves of the barrel, all with the same result, Chris decided to give wine barrels a try.

Wine barrels are dry on the inside and have no dust from the toasting process. Even when a wine barrel’s staves start to dry out, there is no dust leaching out from between the staves to wreck havoc on a home. Chris found the perfect barrel to make barrel tables: a used Wine Barrel.

Now, we still use pieces and parts from a whiskey barrel to make other pieces of furniture. Our Cuddle Bench, Quad Bench, Rugged Cross, Stave Stool and Stave Stool with Back are all part of our Bourbon Collection and are made using whiskey staves. This is because we can clean them and make sure that when they go into a home, there are no adverse side effects like mold. But when it comes to any whole or half barrel furniture, Chris chooses to use wine barrels. When he opens them up, they are clean. So a Full Barrel Bistro Table doesn’t need to be cleaned on the inside before it is secured, stained and finished for your home.

Recently, I was at the Home and Garden show in Cleveland, Ohio with my husband and some friends. I saw a vendor there who was selling Jack Daniels tables. I decided to check out the display and ask a few questions. The table is very cool, and the vendor was very happy to tell me all about the barrels being genuine Jack Daniels Barrels. (You can buy these online from Jack Daniels website). He was willing to pull the bung off and let me have a smell of the inside of the barrel just to prove that they had held whiskey. My next question to him was if they clean the inside of the barrel or not. The answer was not. I wasn’t surprised by this as most don’t know that mold can develop over time. They are just trying to answer the demand for the product and get a sale.

This past fall, a customer came into the store and told the story of her ‘mold’ problem. She was convinced that the person who made the table used a wine barrel instead of a whiskey barrel because the mold smelled sweet. She was utterly convinced that because the smell was sweet, her barrel table had to have been made from a wine barrel and not a whiskey barrel. She then told me that she pulled the table apart and used bleach to clean the inside to stop the mold. At the time she was in the store, she had no further problems with her table. But once she heard our story, she realized that she did have a whiskey barrel table.

So, if your heart is set on a Whiskey barrel table, by all means get one. We will never discourage you from what you want. But our purpose here is to educate you so you can make an informed decision about where that barrel came from and what might happen once you get that beautiful expensive barrel table back home. Chris purposed many years ago to make the best possible items while re-purposing the old into something beautiful, useful and unique! So if you are looking for high-quality, American made craftsmanship, look no further! I can say beyond a shadow of a doubt this is some of the best made stuff in America!

Kentucky’s Whiskey Fungus Problem is out of Control